AUSTRIA – A REVEREND AND IMPOSING CYCLE DESTINATION FOR ALL AGES

Dreamlike landscapes, impressive sights from the past, modern cities, a very special cuisine, in short: a country full of history with lots of charm. Cycle tours in Austria can certainly promise a lot.

The most popular cycling destinations in Austria

A symbiosis of beauty and cosiness

Anyone who has been to Austria before will look back on the stay fondly. Dreamlike mountains, sparkling lakes, architectural masterpieces, ancient cities and a mouth-watering cuisine - that’s all Austria. If the cycle paths are specially selected, the locals are friendly and humorous and the stage locations are well chosen what could go wrong? Whether in the beautiful Salzkammergut, travelling along the beautiful Austrian Danube, on the endless Lake Neusiedl, on the Styrian Mur or in traditional Tyrol, a cycle tour in Austria has something to suit all tastes.

The Danube Cycle Path is probably the best-known cycle path in Europe. Starting from the German Black Forest, the second largest river in Europe flows through ten countries before flowing into the Black Sea. The most beautiful part of the Danube, according to us, is in Austria. Via Passau, the proud river reaches Austrian territory and then winds its way through Upper Austria, Lower Austria, Vienna and leaves via Bratislava. Due to the predominantly flat river course of the Danube, the cycle path bike rides are among the perfect beginner tours. Interesting cities along the way and enchanting, changing landscapes impress almost every cycle fan. Whether the classic tour on the Danube cycle path from Passau to Vienna, Salzburg – Vienna or the more sporty variant of the Danube cycle path, you will be amazed.

A beautiful mountain landscape and sparkling lakes welcome our guests to the beautiful Salzkammergut. If you do not like it here then you cannot be helped! Walk in the Emperor’s footsteps and enjoy a thousand wonderful impressions. The Ten Lakes Tour and its different variants have been inspiring travellers for over 20 years. It was the first Eurobike original tour and is still one of the most popular. For those who don’t want to unpack suitcases after a strenuous bike ride, there is the wonderful invention of the centre-based tour. Discover the Salzkammergut on the Salzkammergut Centre-based Tour, and return to your cosy hotel every day. Re-packing is not necessary.

Salzkammergut - based in one hotel

If the green heart of Austria invites you, you won’t need to be asked twice. Endless expanses, lush vineyards, orchards and green meadows crossed by wonderful cycle paths, interesting stage locations, culture, culinary delights and one of the most popular wine regions in Austria make Styria an extremely attractive cycling destination. The Mur Cycle Path is especially popular, but our Insider tip of southern Styria also has so much to offer.

Southern Styria - based in one hotel

The ‘sea’ of the Viennese impresses with its sheer vastness, the comfortable cycle paths in the area, enchanting villages on its banks and its multicultural charm, which you can feel everywhere. The beautiful Hungary is just a stone’s throw away and offers interesting excursions. Whether on the Lake Neusiedl tour or the Lake Neusiedl centre-based tour, wonderful hours on the bike with lots of sunshine and the best weather are guaranteed.

Lake Neusiedlersee - based in Podersdorf

World famous for its majestic mountains is beautiful Tyrol. But here you can do much more than just go skiing and hiking. For us cyclists too, Tyrol offers a whole network of possibilities in the form of fantastic cycle paths. The level of difficulty of the stages ranges from beginner level to more demanding, sporty tours. Whether Innsbruck – Venice, St Moritz – Innsbruck, or Innsbruck - Verona, Tyrol offers us cycle tours in all directions and for every performance level. We are sure that you’ll find a tour that’s right for you.

Sunny Carinthia, with its imposing mountains and sparkling lakes, offers many a charming bike ride. The geographical proximity to neighbouring Italy also makes Carinthia one of our most popular cycling regions. The world-famous Alpe-Adria Cycle Path offers two exciting tours, namely Villach – Grado – Trieste or Salzburg – Villach. But the Alpe Adria tour - based in one hotel or the Drau Cycle Path classic will also make cyclists happy.

Bike and Boat in Austria

Cast off in Austria!

If you would like to book a cycling holiday, but you cannot escape your fascination of water, then we have something very special in store for you. There’s a reason our trips by bike and boat are so popular: the very special atmosphere on board enchants even the landlubbers among you. The ship acts as a comfortable hotel that swims alongside you, and as an exquisite restaurant. Re-pack your suitcase? This is not necessary on these cycling trips. Hop on board the MS Prinzessin Katharina and the cycle route Passau – Vienna – Passau or check in on the MS SE-Manon and discover the route Passau – Budapest – Passau.

Cycle tours for families in Austria

Cycle tours for young and old

Of course we have also adapted cycle tours for our smallest guests. Because the best time of the year should be the time spent with your loved ones. We also offer our most popular cycle tours in a family friendly version. The stage lengths are shortened a bit, the route is simplified and voila – we have a cycle tour that can also be cycled by children. For example, biking the Danube Cycle Path from Linz to Vienna, or it may be the Ten Lakes tour for families?

Travel stories about our cycle tours in Austria

Useful information about your cycle tour in Austria

The Austrian climate has proven to be ideal for us cyclists. Yes, that’s right. It does rain here, but in general Austria has a very pleasant climate. The spring is usually very sunny with comfortably warm temperatures. The summer can be, especially in the east, very hot with occasional storms. Autumn can often be quite warm until October. Rain can always happen, but that’s the way it is everywhere. From October to March, the probability of seeing snow is very high, especially in the Alps, so our cycle tours do not start before April, and in the mountains May.

A little bit of this, a little bit of that and, of course, a little bit of this....This is a very good way to describe Austrian cuisine. The great K.u.K Monarchy has left its mark on Austria – even in the kitchen. Viennese cuisine in particular is composed of influences from various countries. Italy, Bohemia, Bavaria and of course Hungary have shaped Austrian cuisine and made it what it is today. A fiery beef goulash with bread dumplings, a delicious ‘Paprikahendl with spaetzle’, real ‘Tiroler Kasspatzn’, ‘Schlutzkrapfen’, boiled beef with horseradish dumplings and apple strudel, pancakes, Sacher Torte or 'Kaiserschmarrn'…the list of Austrian specialities goes on. One thing is for sure: Austrian cuisine is not without reason thought of as one of the most versatile and best cuisines in Europe, and even in the world. Decide for yourself! But we can promise you – no one has yet returned from Austria hungry!

Anyone who has carefully read through the section on Austrian cuisine will immediately notice that one of the most important and well-known Austrian dishes is missing – that’s right, we’re talking about the Wiener Schnitzel. But what makes Wiener Schnitzel so unique? The veal is one thing, the other is the Panier (breadcrumbs), but most important is the clarified butter that gives it its wonderful taste. Legend has it that the Wiener Schnitzel did not come to Austria until the 19th Century. Field Marshal Radetzky is said to have enjoyed great flavours at the Costoletta Milanese during the Italian Revolution. Whether the most famous Austrian dish really comes from Italy and was just refined in Austria is truth or fairy tales? Who knows! We only know that a really well made Wiener Schnitzel is worth it. With potato salad, parsley potatoes, French fries, with cranberries or without – give it a try!

Eurobike is not just a tour operator for cycling. Eurobike stands for reliability, years of experience, professionalism and the best customer service. We make sure that nothing goes wrong with your cycling holiday. From the first contact to the trip home, you are well advised. We book comfortable hotels for you, provide you with perfect travel documents and maps from the company Bikeline, transport your luggage on time to your next accommodation and are always on site or via our service hotline to help! 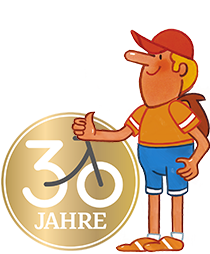